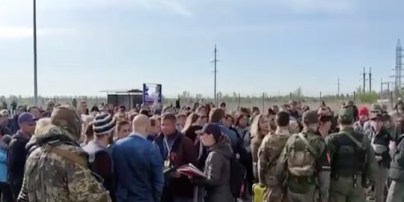 Deportation of Mariupol Residents: Ukrainians Discover That They Are Going to Russia Only After Boarding the Buses (Video)

Petro Andriushchenko, the Adviser to the Mayor of Mariupol, shared a video of so-called “evacuation”, which is actually a forced deportation of Mariupol residents by Russian invaders.

The people discover that they are actually going to Russia only after boarding the buses.

“Metro Districts. The buses arrive at the gathering point, and the Russian troops announce evacuation for civilians. But after the refugees have already boarded the buses, they discover that the road train is actually going to Bezimenne village, Novoazovsk District, from where they will be deported to Russia. The Russian troops and so-called “official volunteers” prevent any attempts to leave the gathering point and avoid “evacuation”. This is the 21st century. The country in the middle of Europe. Forced deportation of civilians. These surreal images become perfectly real in the devastated city of Mariupol”, his post reads.

"I Ordered Him to Get on His Knees and Shot Him": Invaders Confessed of Murders in Kyiv Region, But Showed no Regret

Ukrainian Members of the Parliament Addressed the UN, the EU and the European Council Due to Russian Nuclear Terrorism at ZNPP – Enerhoatom

Six Thousand People Are Waiting in the Queue for Evacuation: the Mayor of Melitopol Spoke About Evacuation from Russia-Controlled Territories

"Mariupol Cages" Are a War Crime: Podoliak Urged the Red Cross to Remember About Its Purpose

"All Life Support Systems Will Be Defrosted": the Russians Do Not Restore Critical Infrastructure in Seized Parts of Luhansk Region